David Duffy was always a hard worker. As a financial analyst, he worked 12 to 14 hours a day, six days a week, minding the ledgers and watching the bottom line for Entergy Nuclear Vermont Yankee. On the weekends, he maintained a small accounting practice, doing about 70 tax returns each year. He didn’t have time to go to the doctor or exercise or watch what he ate. By age 50, he was 465 pounds and stressed to his limit.

He arrived at that limit at 12:30 a.m. on Dec. 30, 2018. That night, he awoke on his couch and instantly knew something was terribly wrong. There was no pain. But he couldn’t get up. He noticed his right arm was very weak; his right leg too. He knew he needed help, but there was no one else in the house. His cell phone was on the kitchen counter, a few yards away. At 465 pounds, Duffy struggled to reposition himself on the couch. Using the left side of his body, he pulled himself onto the floor and dragged himself to the kitchen, where he was able to reach up, grab the phone and dial 9-1-1.

After being rushed from hospital to hospital as medical staff tried to find an MRI machine that could accommodate his size, Duffy finally received the news that he had suffered a severe stroke deep inside his brain. It almost killed him. He couldn’t walk or move the right side of his body, and his speech was badly slurred. He faced a long road of recovery to rebuild his life. And he was a bachelor who lived by himself.

But he was not alone.

Nearly two weeks later, David left the hospital to begin his inpatient rehabilitation at Cheshire Medical Center. Here, he would receive physical therapy to help regain strength in his right leg and arm, occupational therapy to improve his ability to perform activities of daily living, and speech therapy to improve his cognition and speech abilities. Perhaps more importantly, Cheshire would also be the place where Duffy received the moral support and encouragement to change his lifestyle and rebuild his life.

“It was really scary; I was scared, for sure,” says Duffy. “But I remember the nurse at Cheshire coming in and telling me ‘You’re here now, and we’re going to take care of you.’ The staff all reassured me and told me that it was going to take some time, but that I was going to get better.” While David was uplifted by the Cheshire staff, those nurses, therapists and administrators were, in return, bolstered by their patient’s resolve—even in the face of some pretty grim circumstances. 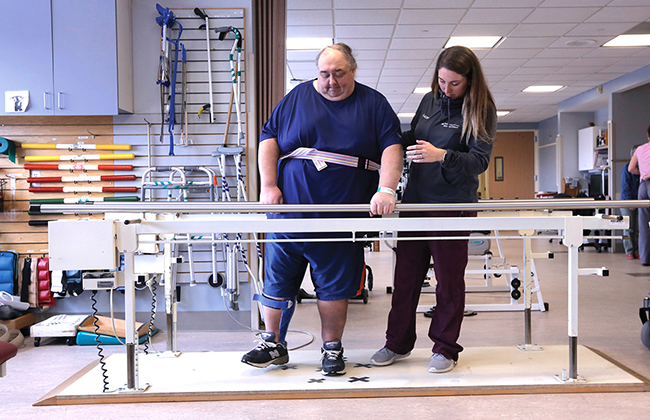 “When we were first contacted by his referring hospital, we weren’t sure he was going to even make it,” says Liz Olmstead, inpatient rehabilitation liaison at Cheshire. “Statistically, people in his situation don’t always survive. But when he arrived, he jumped in and was very enthusiastic. Our rehab team embraced him because he was young and wanted to change his lifestyle. He’d had the proverbial wake-up call.”

David had received the message loud and clear. Every day, he worked with the staff to get better, and gradually he started to see improvement. His speech began to improve. He gained strength in his right arm. After about a month, he was able to stand up beside his bed, then walk for short stretches with the help of a leg brace and quad cane. He was able to start dressing and bathing himself.

Every step of the way, the Cheshire staff was there to guide him, motivate him, comfort him through the setbacks and celebrate the small victories. David got to know each of them by first name. He became so comfortable that when it finally came time for him to return home, he was reluctant to leave his newfound family.

“I was scared to go home,” he says. “I couldn’t take care of myself and didn’t have the support network. At home, I was all alone. But the staff at Cheshire reassured me that it was okay to be scared. They made sure I would have the equipment and supplies I would need at home.”

“So many patients come back to visit us,” says Olmstead. “We become a second home. There’s a level of comfort and the fact that they’re in knowledgeable hands. They came here having been robbed of the independent existence they once enjoy, when they’re here they have that given back to them. A second chance at life.”

Once home, David continued his recovery. He bought a step machine for exercise and joined the Keene Family YMCA, where he could work out in the pool. He taught himself to drive a modified vehicle, with which he could go to the grocery store. He completely revamped his eating habits and stuck to a strict, nutritious diet of fruits, vegetables and salads. He also never lost touch with his support network at Cheshire, visiting the staff regularly.

David made the most of his second chance. He is now down to 215 pounds from his original 465. He has reclaimed his life. And he’ll never forget the people who helped him get there. “The people at Cheshire helped me immensely,” says Duffy. “I don’t know where I would be without them.”